Everything is in vibration. Even solid matter. Vibrations are waves of sound. Everything gives off sound, even if we don’t hear that sound. We hear between 20Hz and 20,000Hz. Other animals have different ranges.

Nada Bhrama: Nada is a sanskrit word that means sound and Brahma is a Hindu name of God. Therefore Nada Brahma means that the Sound is God or God is Sound.

Orion Foxwood, an elder in the earth-based Faery Seer traditions among others, was born with the “the veil,” which is second sight. He often talks of the creation of the Universe as a sigh; again, a sound.

Scientists are finding out that atoms “sing” with vibration and so does the universe. That vibration is based on sacred geometry and the numbers of phi and that sound of Nature is 432 Hertz. The Universe sings at the same Hertz (cycles per second, 432 cycles per second) as the very atoms in our bodies.

What does this mean? Just to dive in a little bit, people say that when they listen to music that is based off of A=432Hz, the music is “softer and brighter, giving greater clarity and easier on the ears.” According to Dutch journalist Richard Huisken, who founded the ‘back to 432 Hz’ committee, claiming that this original tuning was used in ancient cultures and is found on antique instruments like the Stradivarius violin, “the natural pitch of the universe gives a more harmonic and pleasant sound than 440Hz” which is what our typical music is tuned to now. Some of the great musicians of the past, such as Mozart, used music tuned to 432 Hz. 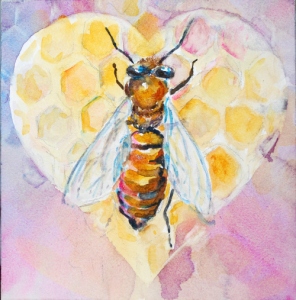 Sounds therapy uses this concept because 432 Hz is healing and seems to work at the heart chakra, “the feeling” chakra, and therefore could have a good influence on the spiritual development of the listener.  The 432 Hz tuning releases your energy and takes you into a beautiful state, where relaxation is natural. 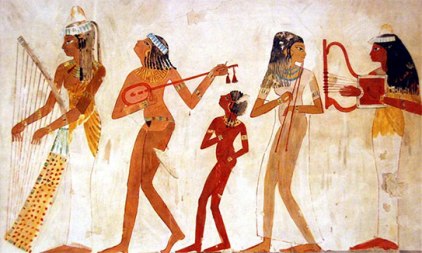 The archaic Egyptian instruments that have been unearthed, so far, are largely tuned to 432 Hz. (Pic right from //eden-saga.com/en/science-anthropology-acoustic-sounds-ancient-buildings-archeoacoustics.html)  In ancient Greece their instruments were predominantly tuned at 432 Hz. Within the archaic Greek Eleusenian Mysteries, Orpheus is the god of music, death and rebirth, and was the keeper of the Ambrosia and the music of transformation. Guess what his instruments were tuned to – 432 Hz. Ambrosia is considered to be “the nectar of the Gods” in Greece and is referred to be some sort of honey drink. Orpheus is most often known as a musician who could tame the beasts.  (Traditionally, Orpheus was the son of a Muse, Calliope and Oeagrus, a king of Thrace. According to some legends, the God Apollo is his father and he gave Orpheus his first lyre. Orpheus’s singing and playing were so beautiful “that animals and even trees and rocks moved about him in dance.” (Wikipedia, Picture below.) 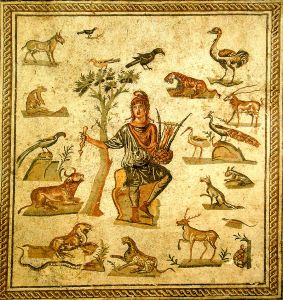 Now, why is this important to me, besides the idea of resonating at the same pitch as the universe, which is no small thing in itself; however, my most favorite of all things, honey bees give off a sound that is also 432 Hz.

Are honey bees helping us to stay in harmony with the Universe? Are they helping to hold the vibration of the Heart of the Earth? However you want to look at it, there is a reason that yogis often explain the inner hum of the heart as a bee buzz. Or why people with near death experiences explain some sort of sound often that sounds like a buzz.

It is important to try to move in harmony with the Earth and the Universe around us, like the honey bee.  When we step with intention of love, we step in harmony.  Imagine a world where every footprint left upon the Earth is a vibration of love.  Where every word spoken comes from the heart. Where the sound of love is woven throughout all of us, so our world is woven with love, much like honey, as it weaves our hearts and bodies into harmony.  This is the world we are creating when we listen to the honey bees and vibrate with love. “The goal of life is to make your heartbeat match the beat of the universe to match your nature with Nature.”
― Joseph Campbell

College of the Melissae Practice

Surround yourself with the resonance of sacred sounds. Download a free sample here or learn how to change your music to 432 Hz here.

Check out the effects of 432 Hz on water drops

Take the teachings of the honey bee to heart. You are sacred. Your physical body resonates at the same frequency as the Universe! Take that knowledge and feel in in your body until you vibrate with excitement! Then do something with that sacred vibration. After all, our whole Universe was created with vibration. What can you create with it?

College of the Melissae is a center of learning for those who feel called by the honey bee. To explore Sacred Beekeeping and follow the trail of nectar left back through the ancient times when there was more harmony in the world, check it out.

2 replies to “Your Sacred Sound”

Follow The Dragon is the Dream of the Bee on WordPress.com